In this work, effects of manufacturing defects on the cavitation performance of a propeller blade section were studied with 2-D steady RANS solvers. DTMB modified NACA66 a = 0.8 sections without and with leading edge (LE) defects were investigated at various angles of attack using Star-CCM+ on structured grids. Using the best-practice settings, verification studies were carried out for the cavitation buckets of a 20% thick 2% camber section without a defect. The main body of this work examines minimum pressure coefficients on a 4.16% thick 1.4% camber section with and without defects near the LE. These lead to conclusions about the relative cavitation inception speeds of defective sections and the consequences for manufacturing tolerances. 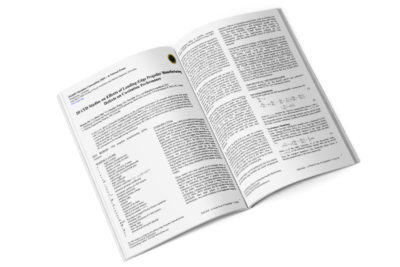 CNC Machining of Propellers to Better than Class S Tolerances

Producing class S propellers and water jet impellers presents serious challenges for propeller manufacturers. To overcome these challenges and consistently manufacture propellers with superior quality, an integrated approach was adopted when developing and implementing a process for Computer Numerically Controlled (CNC) machining of propeller surfaces. Highlights of this process are: (1) CNC machining of all blade surfaces; extreme surface blending, (2) CNC machining to final form & finish without hand grinding and (3) high precision, better than class S. This paper will describe various challenges encountered in the production of CP propeller blades and how these challenges were overcome in order to produce accurate CP propeller blades which exceed class S tolerances. 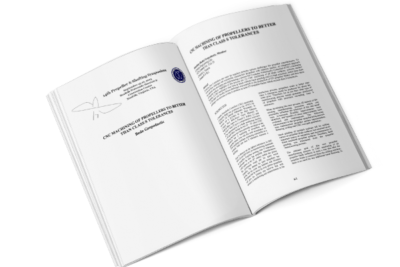 CNC Machining of Monoblock Propellers to Final Form and Finish 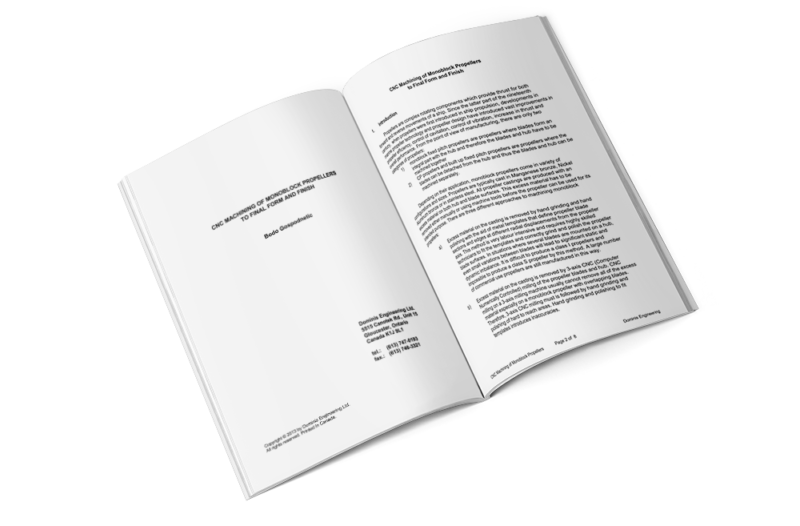 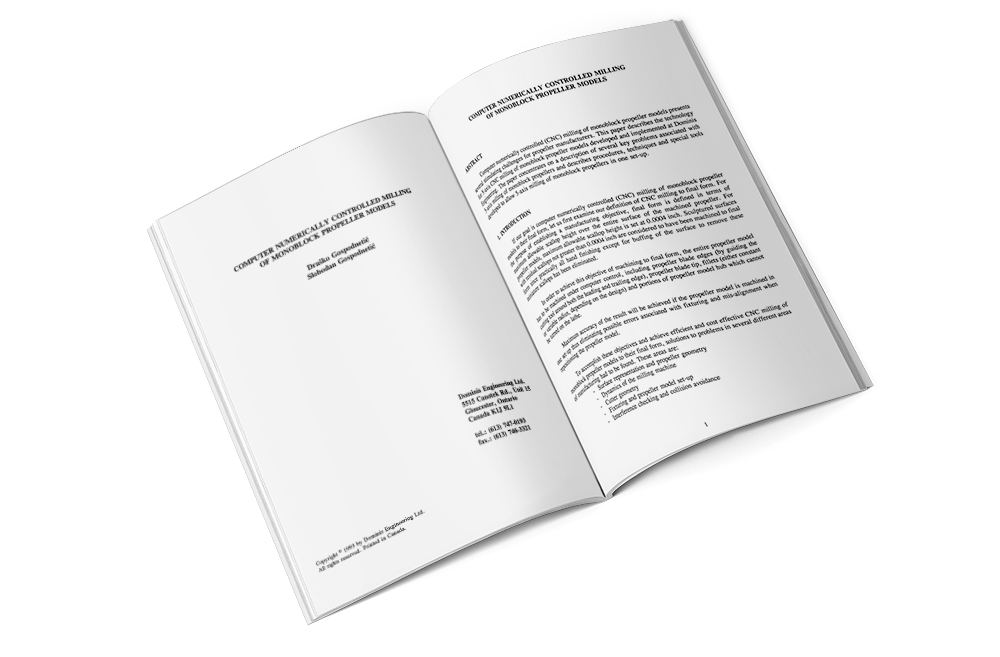 Shaping of sculptured surfaces such as propellers has traditionally been the domain of pattern makers and craftsmen. These highly skilled and experienced professionals translate designer’s drawings into three dimensional shapes using templates and very frequently interpret designer’s wishes on the basis of their own experience and skill. This traditional method of rendering propellers is very labour intensive, very time consuming and the results are very dependent on the individual pattern maker’s skills and experience.

Dominis Engineering Ltd. has long been recognized for the unique way that it designs and makes propellors for large ships, and it has contracts with naval and coast guard authorities in Canada and the United States to show for it. 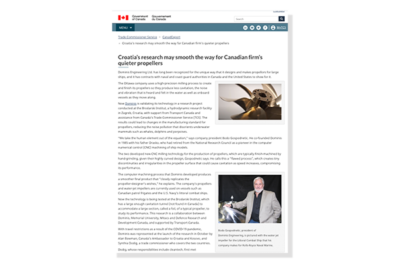 News release: Dominis has been selected for the 2020 TechConnect Defense Innovation Award 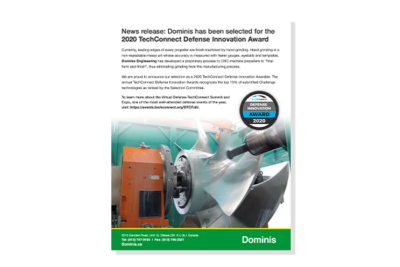 A great many things are made in Ottawa: Legislation, software, propellers… Propellers? Yes. As in frigate propellers. Who would have thought? 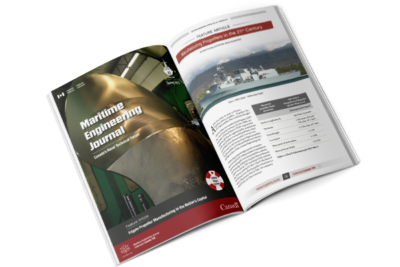 Dominis Engineering announced completion and delivery of 2 sets of 4 water jet impellers for Rolls-Royce Naval Marine Inc., in support of U.S. Navy’s LCS program. The impeller is a critical component of a ship’s water jet propulsion system. “The completion of these impellers is an important achievement for Dominis. It demonstrates that we are a leading player in sophisticated Computer Numerically Controlled (CNC) milling of large, complex rotating components” said Bodo Gospodnetic, President, Dominis Engineering. “Impellers and monoblock propellers are strategically important components and we are proud to have developed manufacturing capabilities which are internationally competitive.”

Dominis Engineering announced completion of a set of water jet impellers for Wärtsilä Defense, Inc., in support of its U.S. Navy program. The impeller is a critical component of a ship’s water jet propulsion system. “The completion of these impellers is an important achievement for Dominis and demonstrates that we are a leading player in sophisticated machining of large and complex components” said Bodo Gospodnetic, President, Dominis Engineering. “Impellers and propellers are strategically important components and we are proud to have developed capabilities which are internationally competitive.” 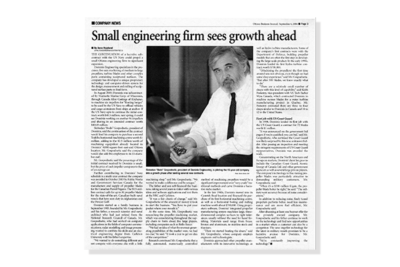 Public Works and Government Services Canada (PWGSC) has awarded a multi year contract for manufacturing and supply of propeller blades for the Canadian Patrol Frigates (CPF) to Dominis Engineering Ltd. of Ottawa, Ontario, Canada. The contract calls for the supply of two ship-sets, with an option for the third set, a total of 30 propeller blades… 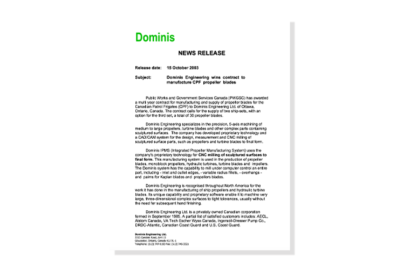 Mitigating the effects of underwater radiated noise has always been important for naval warships. In recent years, it was discovered that URN has a negative effect of sea mammals. Solution can be found in better propellers. 4 December 2020, Lider, Zagreb, Croatia 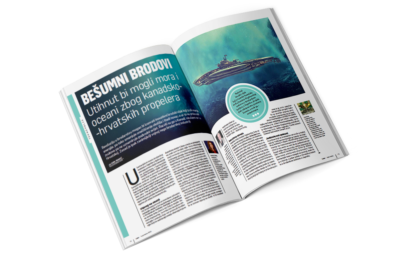 Established in 1985, Dominis Engineering specializes in designing, machining and measurement of marine propellers, water jet impellers and hydro turbine runners. The company has developed state-of-the-art technology for CNC milling of sculptured surfaces to nal form and nish which eliminates the need for hand nishing from the manufacturing process.

Imagine a casting weighing 1,600 kg arriving in your 9,000 sq ft facility. Then imagine machining that casting on a simultaneous five axis milling machine to create a propeller blade spanning 2.3 m wide by 1.7 m high with surface roughness better than 63 micro in. roughness with surface precision within +/- 0.012 in. several times better than the ISO Class S tolerances required by the Canadian or US Navy. And imagine doing that in one setup on one machine, without the need for hand grinding and hand polishing. 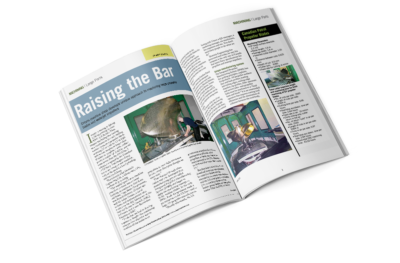 Dominis Engineering announced completion of a series of monoblock propellers for Wärtsilä Defense, Inc., in support of a U.S. Navy’s program. The propellers are critical components of a ship’s propulsion system. “The completion of these monoblock propellers is an important achievement for Dominis and demonstrates that we are a leading player in sophisticated machining of large and complex components” said Bodo Gospodnetic, President, Dominis Engineering. “Propellers and impellers are strategically important components and we are proud to have developed capabilities which are internationally competitive.” 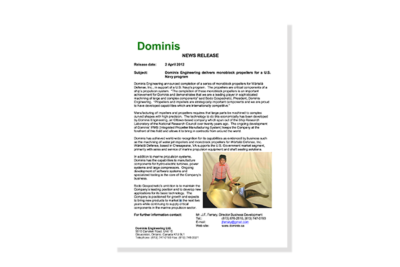 While many Canadian manufacturers are looking to diversify their customer mix, one Ottawa, ON, manufacturing and engineering firm has done the opposite by carving out a specialty field in propeller and impeller manufacturing.

Inspired by this years theme, “Full Speed Ahead: Firing on all Cylinders!” Dominis Engineering is proud to create beautifully sculpted speakers gifts that powerfully highlight the movement and artistry of marine engineering.
Using their state-of-the-art Dominis IPMS (Integrated Propeller Manufacturing System), Dominis milled each gift from raw aluminum to its sleek final form and finish, with no hand-grinding. These inspiring gifts were expertly machined to a surface roughness of just 0.7 micrometers.

Dominis Engineering will also feature their unique marine engineering abilities as an exhibitor at Mari-Tech 2019. 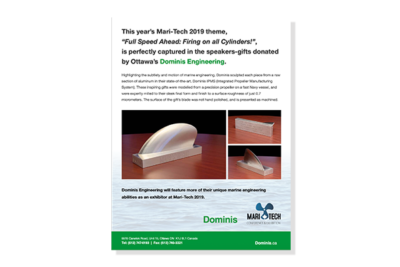 News release: Dominis has been selected for the 2020 TechConnect Defense Innova on Award